On Hiding the Decline and Rebuilding Trust part I (of LXXV) 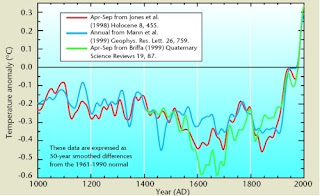 In 1999, the World Meteorological Organization printed a brochure that would have a devastating effect on our society. The brochure featured on its cover the infamous Hockey Stick – a graph with a temperature reconstruction purporting to demonstrate that the alleged recent temperature increase was unprecedented. Almost everybody believed in this graph, and thought it to be the final and ultimate truth. So this graph became the cornerstone in the construction of an unprecedented global warming narrative that came to completely dominate the scientific, political and economical discourse for the next decade. The importance of this WMO cover graph cannot be underestimated. The whole global warming edifice rested on it being correct - this was the single piece of evidence that the warmists had.
But then something happened in 2009. When the Climategate emails were liberated from University of East Anglia, the whole world could see that a trick had been used to hide the decline! The graph did not only contain proxies: the so-called scientist had added actual temperature measurements to make it appear that the temperature had increased the last couple of decades! The proxy data, which were most deceitfully truncated, showed that temperatures were going down! This problem, called the divergence problem, had been carefully hidden in scientific journals where nobody would ever find out about it.
This deceit, yes I do not hesitate to call it a fraud, committed by the notorious Team, a group of activists that are high priests of the IPCC, has fundamentally shaken confidence in climate science. If the Team could remove proxy temperature data that they thought were “bad” from a graph in a WMO brochure and add thermometer data instead, what else could they do? Was there anything in climate science one could trust? The answer was obviously “No”. The public’s trust in climate science was sadly obliterated. Indeed, this scandalous event has led to widespread erosion in people’s trust in science and scientists. Many people don’t believe in physics anymore, and might stop using computers, cellular phones, televisions, microwave ovens and other high technological devices that are based on modern physics. Many people might stop going to medical doctors and start going to witch doctors instead. Many people might start thinking that Earth is flat. Democracy and the modern industrial society are undermined, and feudalism is making a comeback. We are rapidly moving towards a new dark age because of this shameless abuse of a graph in a WMO brochure.
Therefore, it is paramount that we try to rebuild trust in science again. For that purpose, I have started a series of blog posts that will be dedicated to discussing and analyzing the WMO graph and exposing the culprits and bring them to justice and make them take responsibility for this heinous crime. Only by openly and honestly discussing this outrageous event and revealing the truth can the public’s trust in climate science and science in general be at least partially restored.
In this first trust-building post, I want to discuss what adjectives best describe the nefarious and dishonest activities of the Team. After 1000 comments, I will write a second post, and so on. I expect to write about 75 posts on this important subject, until the public’s trust in science, now shattered by the duplicity of the Team in producing that WMO graph from 1999, has been rebuilt. I’m doing this because I believe in science! Nothing, I repeat nothing, can be more important than discussing “hide the decline”. Indeed, I would as far as stating that nothing else matters until this issue has gotten a satisfactory resolution. Until then, all climate science is meaningless and should be ignored.
Ony then can we go on to discuss other importan questions, such as the effect of underwater volcanoes and the iron core sun.
Posted by Baron von Monckhofen at 04:58