A number of brilliant blog scientists have recently disproved the drug-induced theory that Venus is hot due to carbon dioxide. Yes, Carl Sagan was high on drugs when he came up with the theory, just like he was high during most of the recording of the TV show Cosmos (as one can notice). There are also good reasons to suspect that the artist Botticelli was high when he made his famous painting of Venus (to the left). Like those flowers floating around in the air. 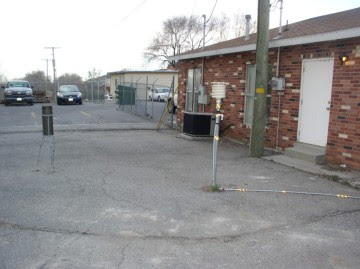 Here I will propose a new and revolutionary theory about why Venus is so hot. The explanation starts at Earth. Look at the authentic photograph to the left (from the blog science blog Whats up With That). It depicts a weather station positioned in a car park covered with asphalt. It is well know that asphalt makes a place much warmer - asphalt alone can probably account for at least 65% of the alleged warming of Earth during the past century. Yet only a small portion of Earth is covered by asphalt. The situation on Venus is different: the entire planet is covered by asphalt. That is enough to increase the temperature on Venus by many hundreds of degrees Kevin! Venus is like one planet-wide car park from hell!
But what about the carbon dioxide? When asphalt (which mainly consists of carbon hydrates) gets hot, it gives away carbon dioxide. So the high temperature is the cause of the carbon dioxide, not the other way around, just like on Earth (remember the ice cores). As usual, the climate scientists have confused cause and effect.
Mundus vult decipi, ergo decipiatur.
Posted by Baron von Monckhofen at 13:07