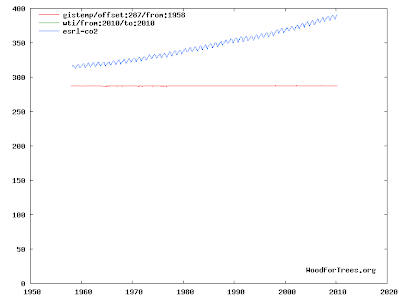 The graph to the left shows the global temperature according to NASA (in degrees Kevin, red line) and the CO2 measurements (parts per millions) from Manua Loa (a volcano)!
The temperature is really completely flat, while the CO2 is going up a tiny tiny bit.
This simple graph disproves two of the most egregarious lies of the IPCC cabal: (1) it is getting warmer and (2) the warming is due to CO2. There is clearly no correlation between temperature and CO2! The increase in CO2 is instead caused by the medieval warming period: as we know from the ice cores, CO2 lags 800 years behind temperature.

Using the current CO2 levels as a proxy for past temperatures, we can also conclude that it was about 100 degrees warmer 800 years ago, a period of great prosperity when they built the great cathedrals in Europe, Richard Lionheart (to the right) defeated the islamofascists, Chinese fleets sailed around the Arctic ocean and the Inca and Aztec civilizations were at their peaks. If 100 degrees Kevin was so good for humans 800 years ago, why should we worry about a couple of tens of degrees during the 21st centuries? Only the bedwetting ninnies and nincompoops of the IPCC watermelon (green outside, red inside) fruit sallad could object, because they hate humankind!
Ceterum censeo IPCCem esse delendam!
Posted by Baron von Monckhofen at 05:55