Booker on climate change and evolution

I recently wrote about Dr Tim Ball’s essay about Velikovsky and climate sceptics. That reminds me of another great essay I read almost two years ago, by Christopher Booker. It was about the bicentenary of Charles Darwin, author of The Origin of Species and the inventor of the theory of evolution. Booker wrote:

What is fascinating about the Darwinians is their inability to accept just how much they do not know. Armoured in their certainty that they have all the answers when they so obviously don’t, neo-Darwinians such as Richard Dawkins rest their beliefs just as much on an unscientific leap of faith as the ‘Creationists’ they so fanatically affect to despise. It is revealing how they dismissively try to equate all those scientists who argue for 'intelligent design' with Biblical fundamentalists, as their only way to cope with questions they cannot answer.
Something strikingly similar has been taking place over the belief that the world is dangerously warming, due to the rise in man-made CO2. For a time the believers in this theory seemed to have the evidence on their side, as CO2 levels and temperatures rose in apparent harmony. But lately all sorts of evidence has been put forward by serious scientists to suggest that this theory is seriously flawed, not least the fact that recently falling temperatures were not predicted by any of those computer models on which the advocates of global warming rest their beliefs.
It becomes increasingly obvious that, like the Darwinians, the warming supporters are so convinced by the simplicity of their theory that they are unable to recognise how much they do not know - and like the Darwinians their response has been to become ever more fanatically intolerant of anyone who dares question their dogma. This might not matter so much if they hadn’t, on the basis of their faith, persuaded so many of the world’s politicians to propose measures which threaten to inflict a real economic disaster on the world.

A very astute observation indeed! Personally, I’m not a creationist, and I find it vexing, outrageous, nefarious and disgraceful that the fanatical AGW-cultists dare to compare us climate sceptics to Bible-thumping fundamentalists. However, I believe in keeping an open mind, and to be honest the science of origins is far from settled. Both sides have good points, and it would be best for science if everybody could admit that: it is never good for science to solidify into rigid dogma enforced by a cruel and oppressive inquisition. And I do enjoy thumping the Bible once in a while, and if anybody has a problem with that, then it is their problem and not mine, and they will surely burn in hell!
Have you noticed that evolution used to be about the progression from lower to higher forms of life, but nowadays, they define it as “any change in the frequency of alleles within a gene pool from one generation to the next”? In other words, any kind of change is evolution. If somebody with brown-haired parents is born with red hair (like my brother’s youngest child), it is “evolution”. Evolution has effectively become unfalsifiable. Does this sound familiar? “Global warming” and “climate change”? Need I say more? They used to call it “global warming” but since it is not warming anymore they have changed it to “climate change”. In addition, many evolutionists faked the data, cooked the books, boiled the spaghetti, like in the case of the infamous "Piltdown Man". That is just like Mann's "hide the decline". Indeed, the parallels are uncanny and legio!

What does Velikovsky and climate skeptics have in common?

Immanuel Velikovsky (1895-1979) was a free-thinking scientist that made many interesting discoveries: Noah's Flood was caused by Saturn entering a nova stage; Mercury caused the destruction of the Tower of Babel; Venus (ejected from Jupiter) caused the events in Exodus including the parting of the Red Sea, and also caused the sun to stand still when Joshua was fighting the Amorites at Gibeon (see picture below), and so on. So what do Velikovsky and climate skeptics have in common? Dr Tim Ball (in the picture), world renowned climate scientist and one of the few who dare go against the Al Goreian priesthood, writes about this for Canada Free Press (mandatory reading). In short, Velikovsky challenged the prevalent scientific dogma, and the corrupt establishment tried to marginalize and ridicule him in the most horrible ways. Today, climate skeptics find themselves in precisely the same situation when they challenge the dogma of the AGW inquisition.

In the end Velikovsky succeeded because he passed the ultimate test of science; the ability to predict. More important, they were in contradiction to prevailing views. He made many and apparently none are incorrect to date. The interesting one was the temperature of Venus, which was almost double what the textbooks said. The same textbooks that incorrectly use Venus as an example of runaway CO2 induced Greenhouse Effect.

Failure of the University President to approve a conference on Velikovsky was symptomatic of the dogmatic, closed minds that pervade modern science. The few scientists involved with the AGW debacle deliberately exploited and practiced that condition. Their actions indicate they saw this as a battle, but it was against the truth and as Aeschylus said, “In war, truth is the first casualty.”

Just like Velikovsky and other great anti-dogma scientists like Erich von Däniken, Richard C. Hoagland and Kent Hovind, I'm sure that we climate skeptics one day will be victorious and the house of cards that is contemporary AGW "science" will fall apart and blow away like a house of cards hit by a low-flying planet.

Image from Whats Up With That

Illegal and criminal hackers recently broke the law by illegally stealing the email above from Fox News Washington managing editor Bill Sammon. The email was later displayed on the criminal blog "Climate Progress" ran by the offender and AGW activist Joe Romm. The email must have been illegally obtained either from Mr Sammon's mail account or illegally forwarded from one of the recipients to some criminal activists.
Anyhow, Sammon is perfectly correct to point out that whether it is getting colder or warmer is scientifically a very controversial issue (just like the citizenship of Obama), and it would be tantamount to communist propaganda to suggest otherwise. Indeed, all non-manipulated evidence unequivocally point to the imminent onset of a new ice age. For instance, large parts of Europe are presently covered by snow, and no "trick to hide the decline" can possibly hide that "travesty". This email proves that FOX truly is a fair and balanced network that embodies the highest journalistic and scientific standards. The activist-criminals surely have shot themselves in the foot with this illegally obtained weapon.
We can only hope that Attorney General Ken Cuccinelli can identify the culprits of this illegal and immoral email theft when he gets hold of the email correspondence of fugitive decline-hider Michael Mann.
Posted by Baron von Monckhofen at 12:42 No comments:

The Lord Monckton censored at Cancun 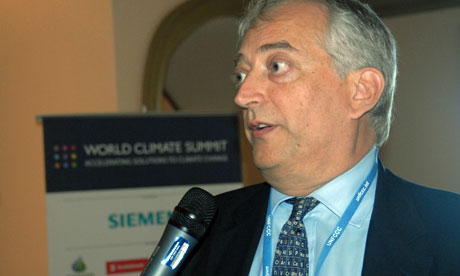 Photograph: Jenny Bates for the Guardian
Censorship rules in Cancun! The Lord Monckton was forced to leave the World Climate Summit lunch party at the Ritz Carlton hotel, reports the Guardian. The Lord Monckton had informed the other participants that man-made climate change was not happening, but this wasn't tolerated by the Hitler Jugend organizers of the event. Indeed, their mind-controlling zealotry went so far that they hadn't even invited the Lord Monckton in the first place.

It is evident that the alarmist eco-fascists are getting increasingly desperate as the AGW house of cards is falling apart! And they really have no manners!